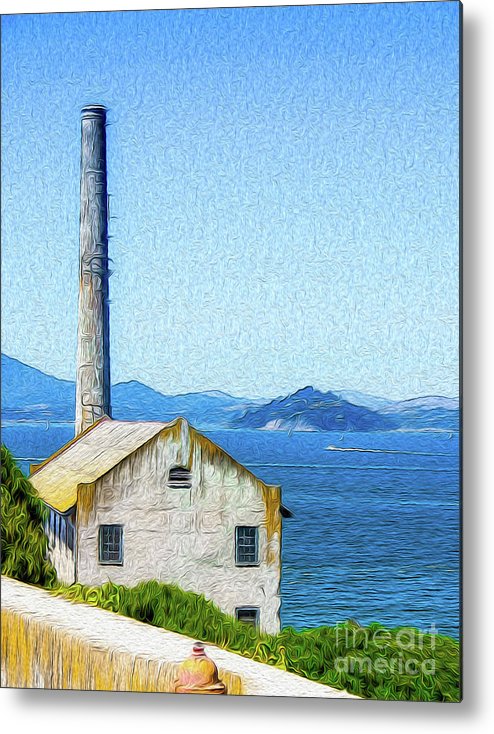 The watermark in the lower right corner of the image will not appear on the final print.

Old Building at Alcatraz Island Prison metal print by Kenneth Montgomery.   Bring your artwork to life with the stylish lines and added depth of a metal print. Your image gets printed directly onto a sheet of 1/16" thick aluminum. The aluminum sheet is offset from the wall by a 3/4" thick wooden frame which is attached to the back. The high gloss of the aluminum sheet complements the rich colors of any image to produce stunning results.

An artist expression of an Old Building at Alcatraz Island Prison. Many, many years ago, I saw the move, "Escape from Alcatraz" starring Clint Eastwood. Ever since that time, I wanted to tour the prison for myself. Year later, while on a business trip in San Francisco, I had the opportunity to do just that. I must say that it was pretty cool to see it in person. Whenever possible, I try to take my camera gear with me to capture some of the sights. I captured this scene while walking the grounds. I gave it some artistic personality and this became the finished work.

Over the years, I have explored many different genres of photography. Throughout my explorations, I have remained true to what ignited my passion for photography, more than two decades ago. That passion is my love for nature, landscape, seascape, travel and other scenic style photography. Having also explored graphic artistry for many years, I strive to take advantage of each opportunity to combine these two creative forums as a means to more fully explore my creative vision. The Fine Art Expressions here represent my passion and personal creative style. It has been a fun and fulfilling journey and I look forward to all of the joys that are yet to come! Thanks for visiting Fine Art Expressions and best regards! Kenneth L...